So as I get back into the blogging scene, I’ll be sharing some of my pick ups over the last year plus, today is a hard to come by issue from the 1947 Tip-Top Bread set.

Aside from the Cuban issued 1946 Propagandas Montiel, this is the only card from his playing days that depicts York in a Red Sox uniform. Yes Rudy is on a Red Sox team photo pack issue as well a TCMA card, but this a tough one to find. I had almost pulled the trigger on an eBay auction for the aforementioned Cuban card a couple of months prior to landing the Tip Top on eBay.

This tough, regional issue consisted of 163 cards including the following teams: Braves, Browns, Cardinals, Cubs, Dodgers, Giants, Pirates, Red Sox, Tigers, White Sox, and Yankees. The 2¼” x 3″ cards are borderless with black and white player photos on the front, advertisements on the back. The set is known for a quantity of obscure players, many of whom played during the talent-lean World War II seasons.

One of those players was Rudy York. Traded from Detroit in January of 1946, York enjoyed a fine year with the Sox hitting for a .276 average, 17 home runs and 119 runs batted in. Rudy acquitted himself well at the plate in the 1946 World Series as well; his tenth-inning home run won Game 1 for the Sox while his 3-run home run in the first inning of Game 3 gave the Red Sox an early lead that they would never surrender. The Red Sox lost Game 7, and the Series, on Enos Slaughter’s “mad dash” scoring play from first in the eighth inning. Rudy finished the Series with a .261 average, 2 home runs and 5 runs batted in.

Ted Williams later said of Rudy: “He did an awful lot for our club that year. He had more information about more pitchers in the league than anybody. He was all the time stealing signs….[he] was a big, good-natured, easy-going Indian, but a powerful guy. I wouldn’t have wanted him to get mad at me.”

Want to learn more about Mr. York, there’s a thorough bio written by SABR that tells of one time Rudy DID get mad at the legendary Ted Williams. He certainly had his vices and demons, but he enjoyed his last All-Star season in the Fens and almost raised a World Series trophy to boot.

He return to the Sox organization in 1958 as a hitting instructor for the Memphis Chicks. The following year, he was hired by Boston to serve as first-base coach under manager Pinky Higgins. When Higgins was fired by the Sox in 1959 after a July 2 loss to the Senators, Rudy acted as manager for the July 3rd game in Baltimore, won by the Orioles by a 6-1 score. He would be his only game as a manager. He hung on for a couple of years as a coach and appears on this 1960 Topps #456 coaches card.

Are you new to blogging, and do you want step-by-step guidance on how to publish and grow your blog? Learn more about our new Blogging for Beginners course and get 50% off through December 10th.

WordPress.com is excited to announce our newest offering: a course just for beginning bloggers where you’ll learn everything you need to know about blogging from the most trusted experts in the industry. We have helped millions of blogs get up and running, we know what works, and we want you to to know everything we know. This course provides all the fundamental skills and inspiration you need to get your blog started, an interactive community forum, and content updated annually.

So it’s been over two years since my last posting over at the original Off the Wall blog, I decided to move my activities to Word Press as I can do more with less time and work doesn’t block Blogger.

Recently I have been seeing more card bloggers on Twitter and through one of them, I noticed this one collector, Mark Hoyle. He had posted several Red Sox cards I had never seen before and the more pics I saw, I felt I had to reach out and see if there was a trade possible.

Now I have been collecting for over 30 years, as well as worked in a great LCS as a kid for 6 plus years but what Mark had in his collection was truly impressive if you are a Red Sox collector. How many times have you seen a 1951 Topps Teams Red Sox card or a 1967 Topps Punch-Outs Tony Conigliaro???!!!! How about a 1974 Topps Deckle Edge Proof of Luis Tiant??!! I raced to eBay to see if I could find my own copies … well maybe one day as some of these cards are pretty $$$$.

A quick back and forth introduction led to a trade, as I had a couple of Red Sox cards he had not come across.

Coming back my way were a couple of issues I had never seen before myself. The first being these 1950 R423 Strip cards of Dom DiMaggio and Mel Parnell.

The 1950 R423 card set consists of 120 cards. Each black-and-white card measures a tiny 5/8” x3/4” and were printed on thin cardstock. The front side features a posed or in-action image of a Big League player with his name appearing at the bottom border. A blank border frames every image, while the card backs bear a simplistic drawing of a baseball field. Card backs are printed in orange, but variations also exist in green or purple. The collection was originally issued rolled on long horizontal strips consisting of 13 separate cards, with each piece connected by a perforation, and available via gumball or novelty vending machines.

While I normally don’t collect postcards, Mark might have changed my views on them. These are from the early 1960’s, and judging by Mr. Ray Webster, his is from 1960. A second sacker, Webster only played in seven games for the Red Sox in 1960 while making ONLY five plate appearances without a hit, but did score one run … it would be his last as a major league player. Surprisingly, he also appears on a 1960 Topps card, of which I do believe I have.

Earl was a solid pitcher in the 1960’s throwing a no-hitter in 1962 and helping the Tigers win the World Series in 1968. What I did not know until reading an archive article in that days Boston Globe, was that Wilson was the first African American to pitch a no-hit game in the American League. It was the first no-hit game by a Red Sox pitcher in six years, and the first by a Red Sox righthander since Howard Ehmke—fabled hurler of another era—pitched one for the Red Sox at Shibe Park, Philadelphia, in 1923.

The 1970 Photostamp set is an extension of the 1969 set the 69 set was issued in 18 sheets of 12. They are easy to tell apart when in sheet form but when cut out biggest difference is they do not have airbrushed logos. The 1970 season marked the second time that the Major League Baseball Players Association issued a collection of 288 “stamps” picturing active MLB players. Each individual stamp measures 1-7/8” x 3” and was printed on a sheet featuring 12 total players. The unnumbered, full-color, glossy stamps feature an individual player with a white border and facsimile autograph across the front. Backs of the unglued stamps carry instructions on how to paste them into the respective album.

Again, another BoSox type card not in my collection! One wonders how the Sox’ fortunes would have played out in the mid 70’s had they not traded Lyle to the hated Yankees for Danny Cater and Mario Guerrero. 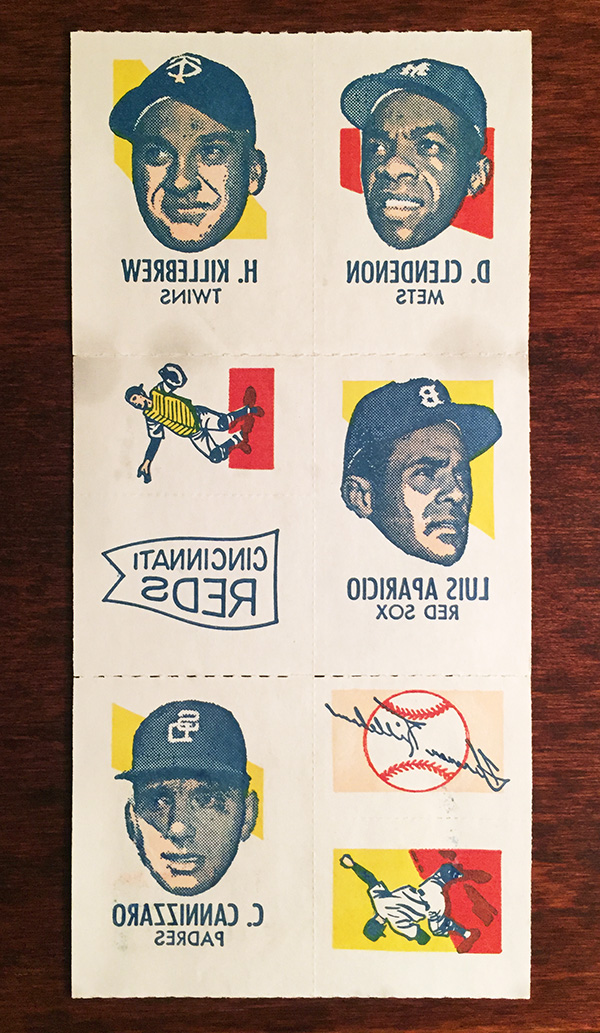 Next was this 1971 Topps Tattoo of Luis Aparicio sheet #6. I knew Topps had done tattoos before in 1960 and 1964 that were inserted into that year’s packs. These 1971 Topps Tattoos came one 3 1/2″ x 14 1/4″ sheet per pack, with numerous types of little subjects ready to be ripped off the sheet and attached to youngsters’ arms and hands. There are 16 in sheets that make a complete set, which features numerous Hall of Famers along with the usual Topps cartoons, team pennants, facsimile autographed baseballs and other little drawings.

One card I had seen before in my days working in the LCS, was this 1971 Milk Duds Ray Culp. Yes, this card has seen better days, but Mark tossed it in as I didn’t have a copy in my collection.

The 1971 Milk Duds set consists of 69 cards and measures 2 ½ x 3 ½” and were hand cut from the back of a box of Milk Duds. These certainly aren’t the most beautiful cards you’ll come across, unless you’re a fan of 1970’s yellow and brown.

I can’t thank Mark enough for reaching back to me on this trade. I hope to catch him and Shane from Shoebox Legends sometime down in Providence and being able to swap card stories over drinks and food. Hope to trade again Mark, I certainly enjoy your Twitter posts as you have quite the Sox collection!

Over the next couple of months, I look forward to sharing more posts on what I’ve picked up since my last blog posts two-plus years ago, what I’m working on, and hopefully pick up some new trade partners. Thank you for reading.

ABOUT OFF THE WALL

Another Sox blog, another collector named Shane. I've been collecting for nearly 35 years, survived the junk wax era, changed collecting interests more than I can count, and seem to always be sorting something. Was blogging over there (otwbbcards.blogspot.com) but now here. Always love trading and finding cards I never knew existed.

Or Email at:
shanewkatz (at) gmail.com