In my pursuit of obtaining one card of every player to put on a Boston Red Sox uniform, there are many cases where a player never appears on cardboard as a Sox. My solution, create custom cards to fill in those gaps. Today’s custom card for my All-Time Red Sox collection is of Floyd Robinson. Floyd’s last card was #404 shown below from the 1968 Topps Set as a member of the Oakland A’s.

This was a quick design to turn around as, thanks to Topps, the picture of Floyd is of the hatless variety and taken from his White Sox days (most likely from 1964-65). In general, I try to find an image of the player in an actual Red Sox unit but Floyd was one of those guys in where I could not find.

A solid player for the White Sox in the early sixties, he found his way back to the Junior Circuit when he was shipped to the aforementioned Athletics from the Cincinnati Reds after the 1966 season. His tenure in Oakland was uneventful and was sold to the Boston Red Sox on July 31 as the 1968 season neared the playoff stretch.

Floyd would appear in 23 games for the Sox over the last two months, garnering only 24 official at bats. Used mostly as a defensive replacement in left and right fields, he’d muster three hits, a run, and a stolen base. His only starts came during a five-day span in late August. His best game for Boston came on August 27 when the Sox took it to Cleveland 7-1 at Fenway Park. Robinson, starting in left field (Yaz played first base that day) would go 1-4, a run, two runs batted in, along with that one steal (off of future Red Sox pitcher Stan Williams). His last game would come against the Yankees on September 29 while going 0-1 and with that an end to a nine-year career as a lifetime .283 hitter.

In tweaking the design of this custom card, my first step was re-typesetting the fonts on the front of the card. I needed to recreate the magenta position/team circle to give the custom card a cleaner, finished look rather than pasting another from a 1968 card. Next was retype setting the circle text using Futura Black Condensed and also needed to play a little bit the horizontal scaling and positioning of the type. One thing I noticed was that the type is not perfectly centered within the circle — as a designer, not sure why they didn’t but can only guess it wasn’t high on the priority list when putting the design together in the plate room. Take a look at a number of other 1968 Topps cards and you’ll see the same — as a designer I want to center the type — but in keeping it real to the original I left it off kilter.

Next was cleaning up the FLOYD ROBINSON text below the picture and here I used Futura Bold Italic but found that the angle in the italic version pushed the text too far right. So I went with Futura Bold and manually skewed the text to align with the original. To finish off the front, I did some Photoshop work to eliminate the White Sox pin stripes and darken the jersey to look more of a road gray version the Red Sox would have had in 1968. 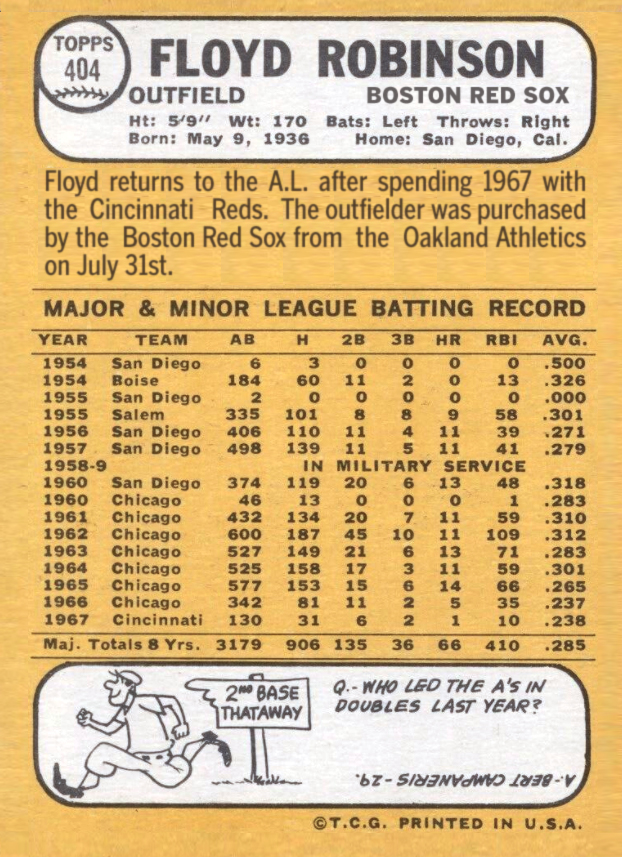 On the backside of the card, I cleared out the OAKLAND A’S and replaced the copy with BOSTON RED SOX. Here I used Benton Gothic Black. Using Benton Gothic Condensed, I retyped the bio write up but tweaking the last sentenced to reflect how Robinson arrived in Boston.

At some point, I plan on printing this and others I have created, as well as future planned custom cards. Thank you for reading and look forward to any feedback you may have.

ABOUT OFF THE WALL

Another Sox blog, another collector named Shane. I've been collecting for nearly 35 years, survived the junk wax era, changed collecting interests more than I can count, and seem to always be sorting something. Was blogging over there (otwbbcards.blogspot.com) but now here. Always love trading and finding cards I never knew existed.

Or Email at:
shanewkatz (at) gmail.com